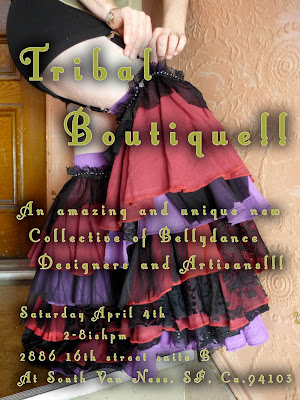 A new collective of professional bellydance desingers and artisans has formed to network, collaborate, propell ourselves forward out into the world, and hold each other up as a supportive unit - something long needed - and I am a proud member.

Since we are so new, we dont have an official name yet, but we thought that those of us who are around right now, could have a little boutique that might be more accessable for some - rather than wait for a more bustling venue. The plan is to do this once a month and hopefully be available for the traveling dancers and admirers of our work.

Forgive my photoshop attempt! I just wanted to get the info up! LOL!!!!!

So far we have:
Minerva's Antennae
Medina Maitreya
KathleenCrowleyCostumeCouture

Please come by if you can!

New Things Up On Etsy 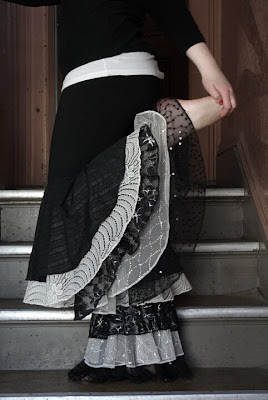 Im finally getting around to putting some stock up on etsy again - things I brought back from my vending adventures!

Im still purging my closet bit by bit. I cant say that Im giving you huge bargains, but I think that what Im posting is pretty special. I just dont have room for it all in my little closets anymore and I want these garments to eventually find good homes!

kc.costumecouture@gmail.com
Posted by Kathleen Crowley at 10:24 PM No comments:

I Can So Relate To This

Maybe you can too.
I never really thought about ideas and creativity this way.
It certainly does take the pressure off!
Maybe we can all chill out some and just let that Muse do the work!

Email ThisBlogThis!Share to TwitterShare to FacebookShare to Pinterest
Labels: Work in progress

The Subject of Fashion Piracy 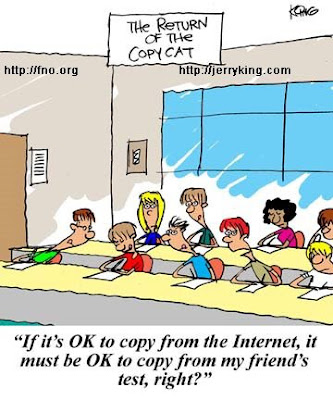 Ive been obsessed with the subject of fashion piracy of late.

While I don't care if someone is inspired by my muse to make their own costumes, I don't really appreciate taking my work and the work of other amazing artists out there and behaving like this is no big deal..... There is a serious problem with that in this country and we designers don't have a leg to stand on......yet.

The laws may be changing. Maybe not very quickly and they may be hard to enforce. Only the big boys and girls can really sue each other over design issues - and I don't want to go down that road anyway. Almost everything has been tossed into the stew by now, but If someone wants to blatantly copy for their own profit (and I'm not talking about making a one off for a random client or making something for yourself, a Friend, or your troupemates), maybe it means that thier own genious is lame - LOL - see the video above! This always speaks for itself, although it can be very annoying. Especially when you swim in the same pond that you are selling your copied wares in. Well, its just rude. Its stealing. Its undercutting. Its piracy. Is this what we want to pass on to our kids?

There is also the whole collective conciousness thing at play as well. Ideas seem to float about until they get grabbed and someone always seems to get that idea into form at about the same time someone else does. Im not talking about this either. Im talking about copy cats.

So I just spent several hours online looking to see if Ive accidently copied anyone. Ive just seen hundreds of pictures of bloomers, yoga pants, samba pants, pantaloons, and I haven't quite seen my exact designs on anyone. I think I saw my fluffie Rufflie Dance pants on a samba dancer on youtube once - and not out of lace. But to be fair, I dont know if its been done my way or not - Im not copying anyone. And nobody that I know of was making them like I do - until now. Someone must have done it at one point, but I think that by the lucky fluke of being able to get my things onto the right people, trends were started and collaborations happened. I was in the right place at the right time and .........well........................................................... 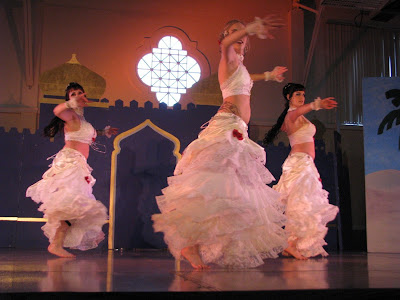 I dont know that anyone as yet has been able to take hundreds of dancers measurements and combine them down into a basic sizing system that fits most. Perhaps. But they are not making what I make - and I started making these with modern dancers in mind: not victorians.

Im very proud of these designs and if I never make another pretty thing that someone adores, Ive been blessed hundreds of times over! Now if I can just get all those blossoming ideas out before someone does it first! 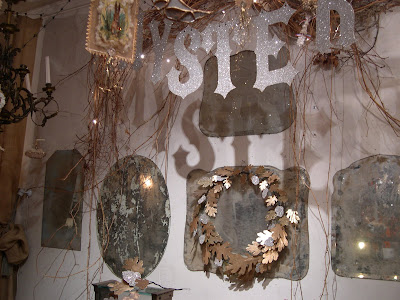 Life is kind of settling down now for me into a pleasant new hum of activity without the previous stresses of my prior daily life.

Thank You Universe! I got Exactly what I asked for!

So yesterday, I had packed up a bunch of orders and did a little photo shoot with Kristine Adams and her niece in our hallway. Feeling like I had gotten a lot done that day, I hitched a ride with Kristine and friends to go pick up some furniture at the Warehouse in Port Costa. And then some other friends were going as well, so it turned into a little party.

When we got there, it turned out that Wendy Addison from Theatre Of Dreams was going to be letting us into the building. So I FINALLY got to go inside her Amazing Wonderland of a shop and meet her. I felt like I was meeting the Queen. Rarely do I "idolize" people (for lack of better word - maybe an artists' crush would be more like it?) - but there I was being the nervous fan. Silly but true and she hugged me. Does it get better than that??????

Now Kristine and I have great big glass glittered WC letters on our bathroom door!

So we loaded up furniture, had drinks at the warehouse, had fun and intelligent conversation, headed back to town, unloaded furniture and then we all went out for dinner in the Haight. One of my more fun and all-too-rare-these-days impromptu adventures..........


Such a nice Sunday!

Photo stolen from Wendy Addison's blog - this is one of her beautiful walls!

kc.costumecouture@gmail.com
Posted by Kathleen Crowley at 1:07 PM No comments:

This version isnt as gory as the one I grew up with, but I guess we have to be more sanitary these days!

Happy Saint Patricks Day!
Posted by Kathleen Crowley at 12:20 AM No comments:

So Christina of Black Lotus Clothing and I are loading up her RV tomorrow morning and heading down to GothLa for a fun day of peddling our wares and hanging out with our friends and patrons. Jill Tracy will also be there with a table of merchandise and I highly urge you to go say hi to her because she is Supremely Lovely! And please come say hi to us as well!!!!!

My etsy shop will be down for a week while I'm out doing some serious fabric shopping.

Back to business after that. I don't think I'll be taking many online custom orders for a while. I have to put a little moratorium on those and restructure how I'm going to handle these in the future. It would be nice if I could just get a proper little line out for all to buy when one needs a Click N Fix, but we'll see............baby steps! Like Kristine likes to say.....Bird By Bird...........


kc.costumecouture@gmail.com
Posted by Kathleen Crowley at 10:52 AM No comments: