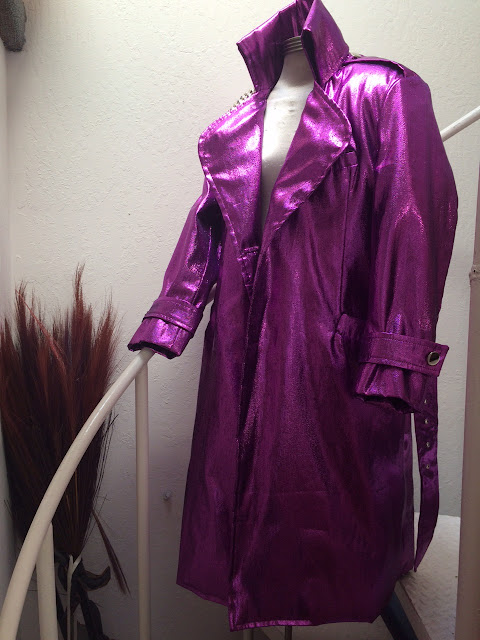 I made a Prince costume last Halloween. This was another fun project given to me by the wonderful Chris March. He has such great vision and we share that larger than life element that makes for good drama in a garment. ( Larger cant be large enough) We work really well together.  I was commissioned to make it as exactly as I could - according to client and designer specs - which was not so easy, as the original fabric for the coat is not made any longer (80's) and was very hard to track down.  But if I remember correctly, it was finally found in a fabric store located in New York, we got more than enough, and I did the best I could with the few good photos out there on the internet.  Chris found something fun for the matching pants and vest. I found good buttons at Stone Mountain and Daughter. The client is a die- hard Prince fan and he must be grieving heavily right  now. He had gone to such lengths as to purchase a copy of one of Prince's guitars. I listened to Prince music nonstop the whole time I was working on this outfit, so I was having a lot of fun.  I was dancing a lot around the studio in the wee hours. This was a project with good memories and now I'm saddened after Prince's  untimely passing, but glad for that point in time when I was immersed in the Purple One's Princedom. For many he was a big part of the soundtrack of one's life. His creativity touched us all.

I had almost forgotten about this project! Unfortunately, Prince's passing reminded me of it again. So I thought that I would share.  Supposedly the client  and his wife threw a three day Halloween bash and had an amazingly great revelrous time like it was 1999! ( as one should do when hosting a three day bash) I made his wife's costume as well, and have some photos somewhere that I'll post soon. 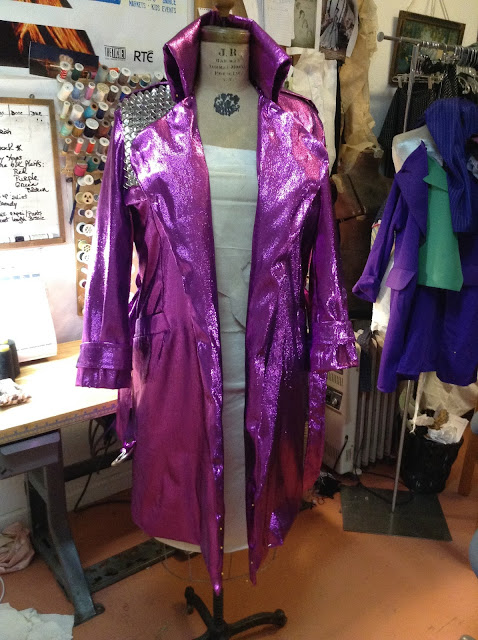 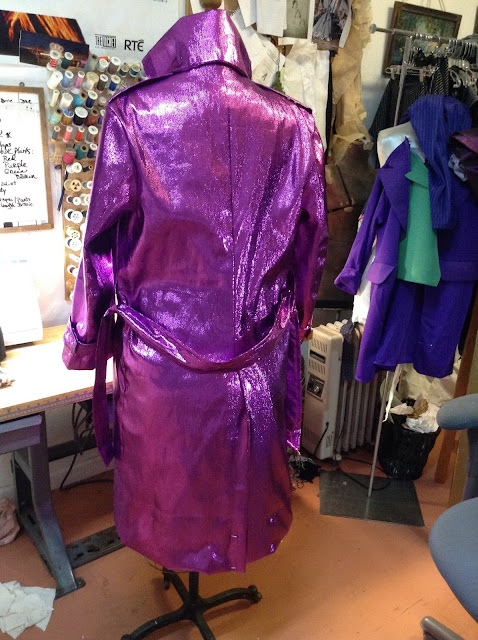 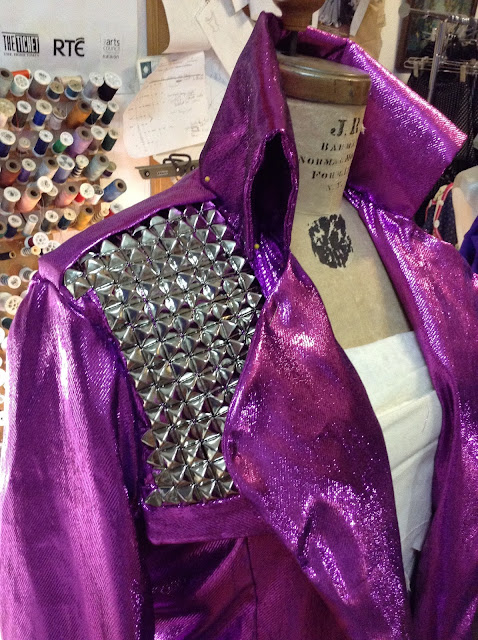 It always starts with a mock up. This was imperative since the client was living on the other side of the continent. But I would do it for someone living next door as well. It is always best to do this so that you get most of the fitting problems out of the way before cutting into the fabric. The collar was too high and I thought the bottom of the pants legs were a bit too wide, but the pants suited him and I cut the collar down a bit. I guess I could have cut it down more, but everyone was happy with it.  It was Halloween, after all. You always end up putting some of your personality and flair into a costume - isn't that why people come to you in the first place? ( and knowing what you are doing helps! ) 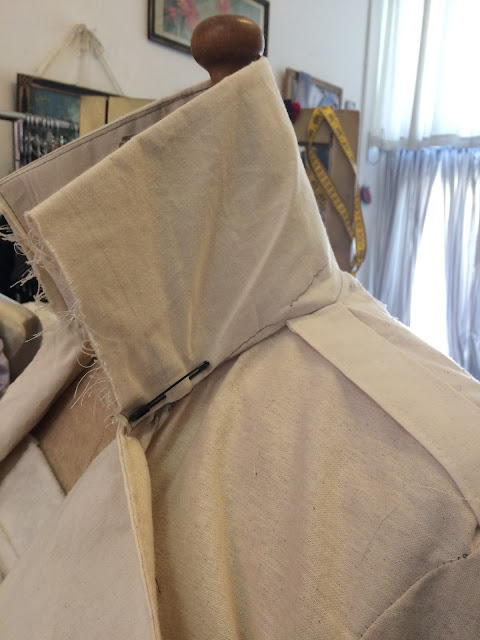 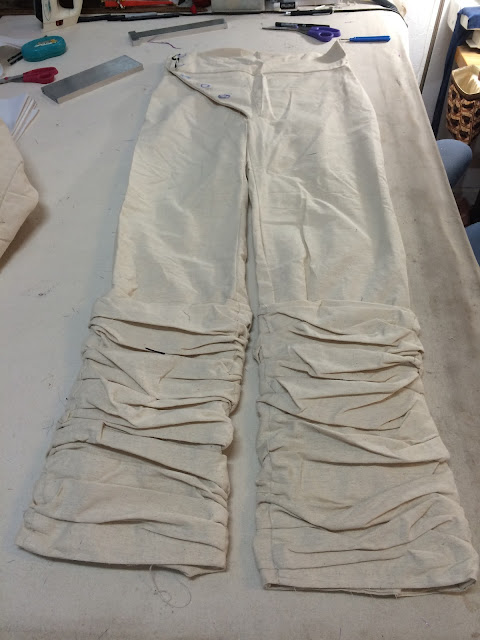 I had never made a front opening like these pants have, and of course, there isnt a pattern for this that I know of, so I had to do some pondering on that one. Its sort of like a drop-down sailor pant opening - on one side - on the diagonal. With a zipper and buttons. I'm not sure if there was a zipper in the original Prince pants, but I wanted no accidents.
Everything fit him perfectly and he loved it! 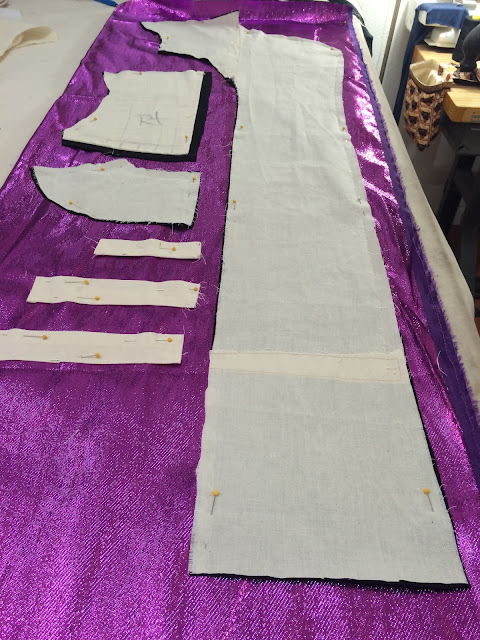 I generally use the pressed out and well marked mock up as a pattern. If I think I'll use the pattern again, I'll transfer it onto paper. I used to keep everything.. But now I throw it out after a year.

I lined his vest and pants because that brocade gets pretty itchy and I wanted him to be comfortable as well as giving the body of the costume some substance. I like costumes to be made as well as one would expect of a nice garment. 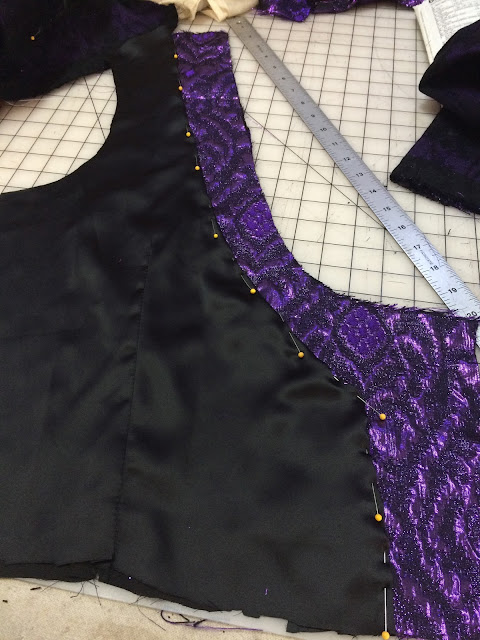 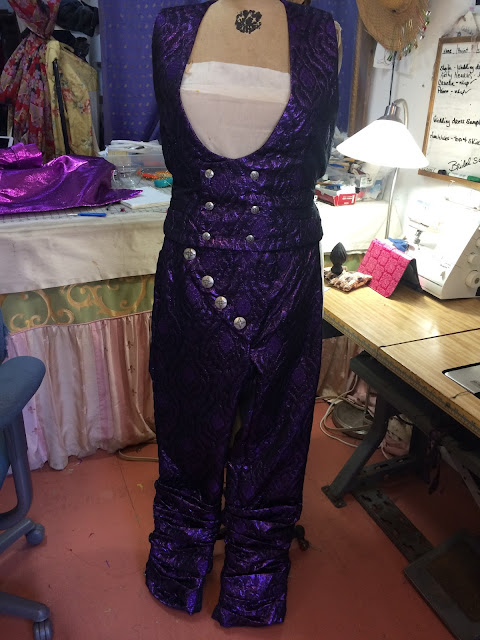 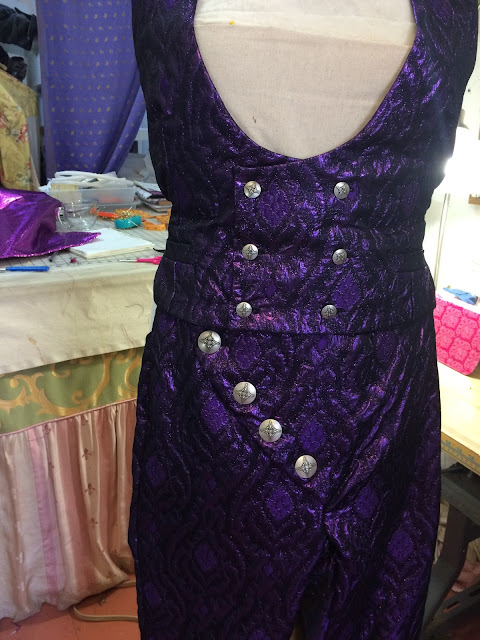 And this is what the coat fabric looks like with just a bit of light shining on it in the dark........ 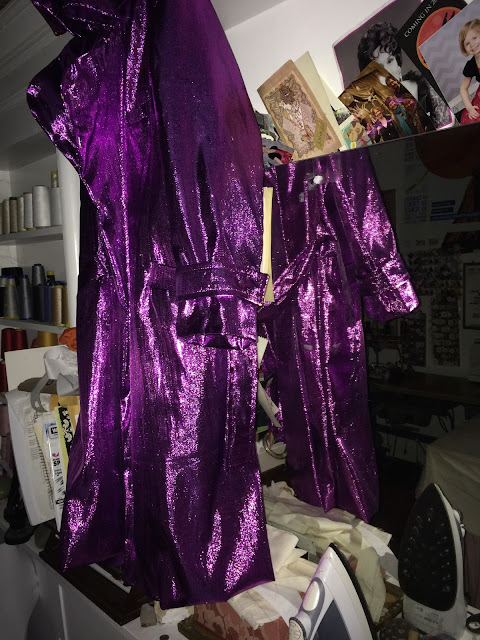 Can we put a hold on icon deaths for a while please?  But the message is clear: we don't know how long we've got this time around. So you had better make the most of it. And we should be supporting and loving our artists while they are alive and making art.
R.I.P Prince. You done good. 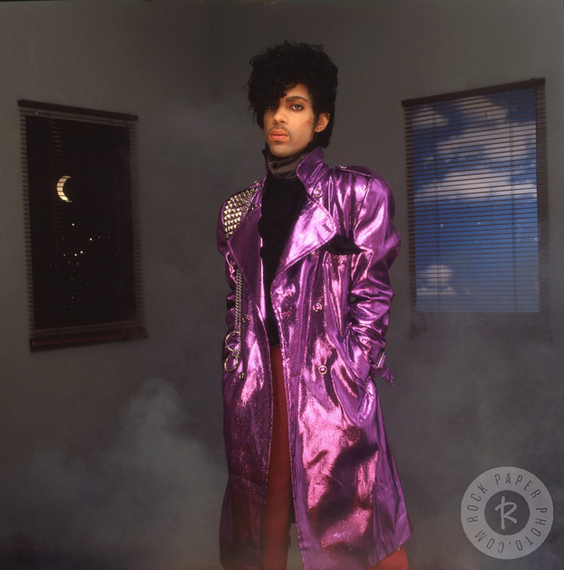 Posted by Kathleen Crowley at 10:59 PM