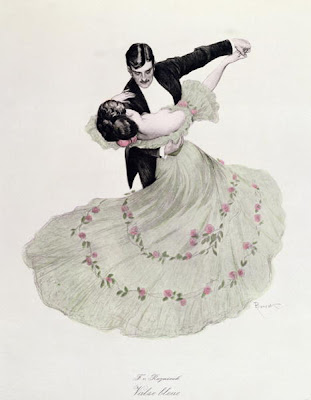 Certainly not I. But my friend Lynne did and as Erling Wold is the composer, and I worked below him in my basement workshop, heard the things being created, and was inspired to fantasies of being swirled around a grand ballroom in a red silk bustle dress by a tall, dark, handsome, mysterious stranger, I can attest to the fact that this will be a delight to your senses!

Invite that I received this morning:

On the last day of February, next week in fact, I will be conducting the San Francisco Composers Chamber Orchestra in the premiere of a new work, viz. Two Orchestral Waltzes for Lynne. The express details of the event are below, but first, something on the nature of the dance itself:

"The waltz, in fact, is magnificently improper - the art of tone turned bawdy. I venture to say that the compositions of one man alone, Johann Strauss II, have lured more fair young creatures to lamentable complaisance than all the hypodermic syringes of all the white slave scouts since the fall of the Western Empire. There is something about a waltz that is simply irresistible. Try it on the fattest and sedatest or even upon the thinnest and most acidulous of women and she will be ready, in ten minutes, for a stealthy kiss behind the door - nay, she will forthwith impart the embarrassing news that her husband misunderstands her, and drinks too much, and cannot appreciate Maeterlinck, and is going to Cleveland, 0., on business to-morrow..." H.L. Mencken.

The two waltzes here are written for my inamorata, and reflect two of her most beguiling facets, the first: as the fallen Russian aristocrat, the woman of a certain expectation lacking the allowance that would sanction it; the second: as the haughty and dominating sovereign, unwilling to brook any usurpation of her ultimate and crushing authority. Popularly, waltzes are thought of as dances in 3/4 time, but the word waltz merely means a revolving dance, as both words come from the same root, and many dances named waltzes over the last few centuries have been in a variety of meters: 2/4, 3/4, 6/8, 5/4. But in the end, composers get to call their works whatever they want, so, while the first soi-disant waltz is in 3/4, it is hardly a dance at all, more a concert statement of unbridled passion, discords and all, and the second, while primarily in a fast 3/4 with shifts to 2/4, carries us away in a whirl, a flash of ankle as the ball gown spins up, bodies pressed against each other, a fevered head falling to a shoulder in a swoon of sweet and utter surrender.

And now, the official announcement:

SAN FRANCISCO, February 2, 2009 -- If you are looking for an invigorating new musical experience ranging from new through-composed gems to electronic music and free improv with graphical scores; have we got a deal for you! SFCCO, the only orchestral ensemble comprised of compsers, has the largest selection of new and pre-owned new-music premieres.

Michael Cooke considers quantum mechanics and general relativity in “String Theory” utilizing graphical notation and free improvisation for the entire ensemble. Philip Freihofner's “What Are You Going to Dream Tonight” presents technology-driven free writing for oboe, clarinet, electric keyboard, and viola. From the dreamy to the hallucinogenic with Davide Verotta’s “Yanitl”. David Graves and Clare Twohy team up for a fire sale in the collaborative “Fireproof Winds” Lisa Scola Prosek’s “Serenade for Trumpet” is based on a melody by her son Eduard Prosek (who is also the soloist) and the drive-in movie side of film noir. Loren Jones’ “February's Children” expands the ensemble with electric guitar and bass, harp, synthesizer, and percussion. David Sprung's “Serendipities” is an ambitious piece for large ensemble. Special deals for you thrill seakers with Erling Wold's bawdy “Two Orchestral Waltzes for Lynne” and Mark Alburger's deliciously inappropriate “Sex and the Orchestra”. If more traditional means are your thing, consider “Wind Sextet” by Gary Friedman and “Adagio and Dance” by John Beeman.
Posted by Kathleen Crowley at 8:11 AM

Don't you love me

You can find my pics here